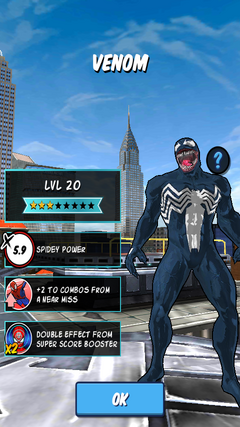 Formerly a bright young journalist, Eddie Brock's reputation was destroyed when he failed to properly vet an exclusive story he wrote about the identity of a villain known as the Sin-Eater, which was later proven to be untrue by Spider-Man. Brock was fired and the resulting scandal contributed to his divorce. A laughingstock with no job prospects, Brock was about to take his own life when he was found by the Symbiote, which had just been rejected by Spider-Man. The Symbiote bonded with Eddie and, because of their mutual hatred of Spidey, they became the villain known as Venom, who would become one of the most formidable foes that Spider-Man ever faced.

Retrieved from "https://spiderman-unlimited-mobile-game.fandom.com/wiki/Venom?oldid=9028"
Community content is available under CC-BY-SA unless otherwise noted.