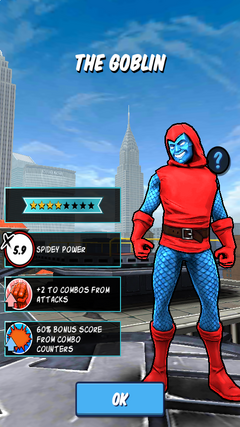 Though this masked marauder looks like one of Spider-Man's enemies, it is none other than an alternate version of Peter Parker! In an alternate dimension similar to our own, Peter Parker suffered a very serious nervous breakdown after the death of Gwen Stacy. Desperate for vengeance, he slaughtered his entire rogue's gallery until the last person he had left to kill was Spider-Man. After destroying his costume, he assumed the identity of the Goblin -- becoming, in the depths of his madness, that which he had hated worst of all!

Community content is available under CC-BY-SA unless otherwise noted.
Advertisement