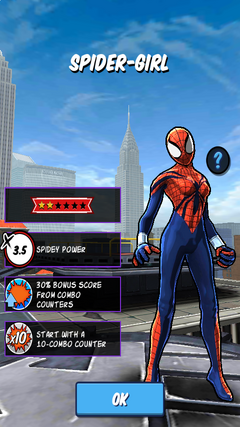 The daughter of Peter and Mary Jane Parker, May "Mayday" Parker was in high school when her powers first started to emerge. When her family was threatened by the new Green Goblin, grandson of the original, May assumed the identity of Spider-Girl and defeated him. Since then she has fought crime and kept a new generation of villains from running wild across New York City.

Retrieved from "https://spiderman-unlimited-mobile-game.fandom.com/wiki/Spider-Girl?oldid=8572"
Community content is available under CC-BY-SA unless otherwise noted.