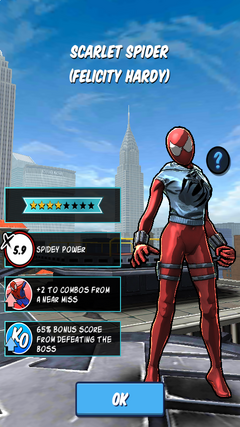 The daughter of Felicia Hardy and Flash Thompson, Felicity Hardy was trained by her mother from a very young age in martial arts and gymnastics. Following her parents' divorce, Felicity came to resent her mother. Believing that nothing would bother her mother more than if she became a superhero, Felicity took on the identity of the Scarlet Spider and began fighting crime!

Retrieved from "https://spiderman-unlimited-mobile-game.fandom.com/wiki/Scarlet_Spider_(Felicity_Hardy)?oldid=8888"
Community content is available under CC-BY-SA unless otherwise noted.