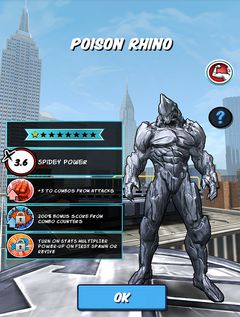 On a parallel Earth, Venom and his brood are being hunted by a race of beings known as the "Poisons". They will not be satisfied until they've consumed and assimilated every Venom in the multiverse. And even though Venoms from across the multiverse are assembling into a resistance to combat this threat, the Poisons are winning. During an assault on resistance HQ, Venom Rhino was brought into the Poisons' fold against his will. He is a Venom no more. Now he is a Poison, and oh, how he hungers!

Retrieved from "https://spiderman-unlimited-mobile-game.fandom.com/wiki/Poison_Rhino?oldid=9393"
Community content is available under CC-BY-SA unless otherwise noted.