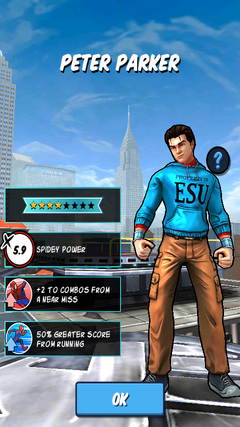 An awkward young science nerd, Peter Parker's entire life changed when he was bitten by a radioactive spider that gave him super powers! Initially trying to use them for his own fame and fortune, Peter decided to become a hero after ignoring a fleeing thief, who later killed his uncle Ben. Since that day, Spider-Man has fought for those who cannot fight for themselves because, as his uncle said, "With great power comes great responsibility!" During the Spider-Island event, when normal New Yorkers received spider-powers from a virus created by the Jackal, Peter was able to take to the streets without his costume, even inspiring other New Yorkers to stand up and be heroes!

Retrieved from "https://spiderman-unlimited-mobile-game.fandom.com/wiki/Peter_Parker?oldid=8204"
Community content is available under CC-BY-SA unless otherwise noted.