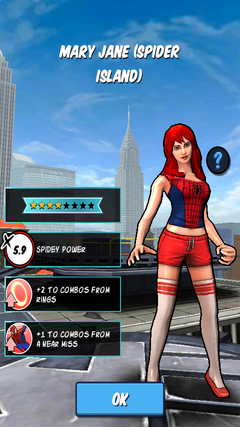 Mary Jane Watson grew up near Peter Parker in Queens, New York. Raised by her aunt Anna, Mary Jane was a close friend of Peter and Gwen Stacy. After Gwen died, Mary Jane was there to comfort Peter, and eventually their friendship blossomed into love. Eventually, Peter and Mary Jane would get married, only to have that marriage erased by the demon Mephisto in exchange for Aunt May's life. Though Peter and Mary Jane are still friends, it remains to be seen whether or not they will become something more someday. During the Spider-Island event, Mary Jane got Spider-powers from a virus released in the city by the Jackal. She was not happy to lose them when a cure was developed, but understood that it was the only way not to eventually become a monster.

Retrieved from "https://spiderman-unlimited-mobile-game.fandom.com/wiki/Mary_Jane_(Spider_Island)?oldid=9630"
Community content is available under CC-BY-SA unless otherwise noted.