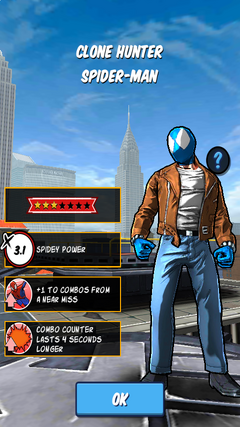 Years ago, a college professor of Peter's, Miles Warren, cloned Peter Parker. One of those clones would later murder someone and, because he shared Peter Parker's fingerprints, Peter would be arrested for the crime! While Peter was in jail, the murderous clone kidnapped Mary Jane and Peter had to break out to rescue her. Separated from his red and blue costume, Peter donned the few remaining bits of his black costume that he still had and then went to rescue her -- proving that it isn't the clothing that makes the man, but the heart of a hero inside of him.

Community content is available under CC-BY-SA unless otherwise noted.
Advertisement