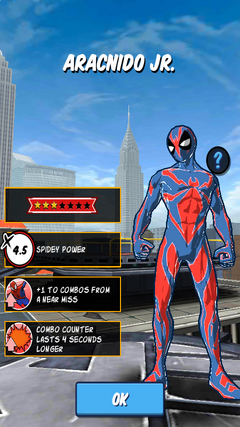 The son of a Mexican wrestler known as Aracnido, Aracnido Jr. witnessed the death of his father in the ring after his partner, Escorpion, was paid off by mobsters. Yearning to avenge his father, he took his father's old costume and became the Spider-Man of Mexico City!

Retrieved from "https://spiderman-unlimited-mobile-game.fandom.com/wiki/Aracnido_Jr.?oldid=8148"
Community content is available under CC-BY-SA unless otherwise noted.