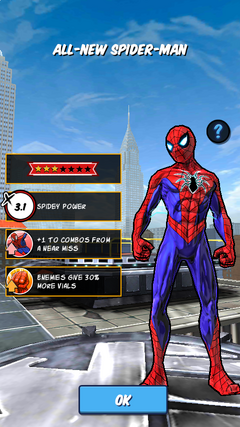 High-school student Peter Parker was bitten by a spider which had been exposed to radioactive rays, and through a miracle of science, Peter found that he had gained the spider's powers... and had, in many ways, become a human spider! From that day on, he was the Amazing Spider-Man! But there are always complications where Spider-Man's life runs into Peter's -- whether it means protecting the ones he loves from mortal danger, having his body taken over by his greatest nemesis, or fighting inter-dimensional evil feeding on the life force of Spider-people everywhere. Because of everything he's been through recently, Peter decided that it was time to update both his costume's fashion and its functionality. Now utilizing the most cutting-edge tech woven into his suit, Spidey's got a new look to go along with his new attitude!

Retrieved from "https://spiderman-unlimited-mobile-game.fandom.com/wiki/All-New_Spider-Man?oldid=7632"
Community content is available under CC-BY-SA unless otherwise noted.